Business Aviation and Sustainability: An Industry With a Good Story to Tell 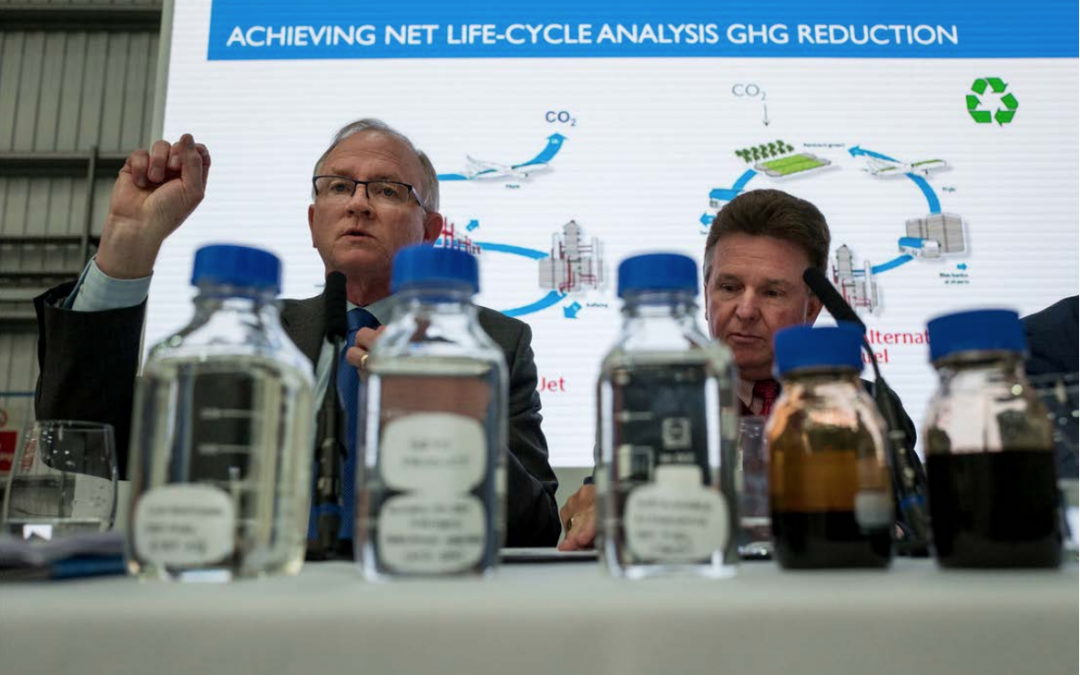 Environmental responsibility, and wider sustainability matters, are important areas of focus for companies, citizens and industries around the world, including throughout the global aviation sector. While it does not often make headlines, one segment of the aviation industry in particular – business aviation – has made significant investment and progress in these areas.

Global business aviation operations represent 0.04% of anthropogenic CO2 emissions – nevertheless, our industry has demonstrated a serious commitment to the ongoing exploration of new methods and technologies to significantly reduce this figure, and a pathway has been established for reducing greenhouse gas emissions from aircraft in our sector.

Indeed, business aviation has long been on the forefront of technological innovation, including efficiency gains – business aircraft were the first civil aircraft to use winglets, advanced aerodynamics, state of the art avionics, and to demonstrate improved fuel burn from engines. Manufacturers are firmly committed to continue on this path of improvement.

Our industry inherently seeks ways for flying more efficiently, as part of meeting business-transportation challenges. This efficiency-focused philosophy carries over into carbon-emissions reduction, driven by the efforts and commitment of a variety of business aviation stakeholders; that said, assistance is needed from governments and policy makers.

As the International Civil Aviation Organization (ICAO) prepares for its 40th Triennial Assembly in 2019, it is
important to recognize some significant milestones in this commitment, and why they are so important not only for business aviation, but also the broader global aviation industry and citizens around the world.

A DECADE MARKED BY A REDOUBLED COMMITMENT TO SUSTAINABILITY

Business aviation has long made strides on reducing emissions, and one major, additional, milestone in this area was crossed ten years ago, when the International Business Aviation Council (IBAC) and General Aviation Manufacturers Association (GAMA) announced and published the Business Aviation Commitment on Climate Change (BACCC), a programme outlining a continued effort in reducing the industry’s carbon footprint.

Given the global nature of our industry, and its prevalence of international operations, stakeholders in the BACCC identified a critical need for a globally harmonized environmental policy that ensured safe, efficient and balanced operations. Among the tenets of that commitment, which grew to include signatories from business aviation stakeholders worldwide, was a pledge to a 2% improvement in fuel efficiency per year from 2010 until 2020, with carbon-neutral growth from 2020 onwards and a 50% reduction in carbon emissions by 2050, compared to 2005 levels.

When the plan was unveiled, the signatories noted that achieving these goals would require improved  technologies, including sustainable aviation fuel, operations, infrastructure and market-based measures.

Companies utilizing business aviation – along with aircraft and engine manufacturers, fuel providers and other stakeholders – have long sought to improve their own environmental footprint and the efficiency of their products and operations. The BACCC represented the first industrywide, united effort to reduce carbon emissions, and a significant amount of work has been undertaken in the years following that pledge to identify the most effective paths forward in achieving its goals.

One of the most promising avenues for fulfilling the commitment to reduce CO2 emissions with today’s business aircraft is through the use of sustainable aviation fuels (SAF), derived from renewable feed stocks and other sources. Multiple technology paths exist to produce such fuels, and innumerable flights over the past decade have consistently demonstrated their viability and benefits.

Sustainable aviation fuel – essentially Jet-A with a nonfossil fuel element, blended with up to a currently certified 50% mix – meets the same ASTM standard (D1655) as current aviation fuel; it is a simple “drop-in” for aircraft, indistinguishable from the completely petroleum-based product. The only effects to aircraft performance are beneficial ones: a cleaner burn and commensurate reduction of overall CO2 emissions over the life-cycle of the fuels’ manufacturing process, together with the environmental benefits in sourcing such fuels from renewable resources.

Our industry’s united support for SAF was first codified last year, as a coalition of international business aviation organizations joined government officials at the 2018 European Business Aviation Convention & Exhibition (EBACE2018) in Geneva to redouble the focus and effort on advancing the development and adoption of SAF.

At the heart of this initiative was a new resource to benefit the industry: The Business Aviation Guide to SAF, focused on raising awareness and adoption of available and emerging sustainable aviation fuel options, and providing a road map for the education about, and use of, the fuels.

This initiative also included a new, dedicated website with resources and other information about SAF, futureofsustainablefuel.com, developed by the coalition, supported by committed airframe manufacturers and fuel suppliers, and created to bridge a “knowledge gap” on the safety, availability and use of sustainable aviation fuels.

These combined efforts address three important aspects of SAF use: that such fuels for business aviation are safe, approved and available now; that SAF offer a myriad benefits, including those in support of the sustainability of business aviation, corporate responsibility and reduced emissions; and that such fuels are derived from multiple feed stocks that are sustainable, renewable resources, and are therefore an environmental “win-win.”

With the Guide spurring industrywide interest in SAF, the next step in raising awareness and promoting education of its benefits came in January 2019, as IBAC joined with a coalition of industry groups to sponsor the first-ever SAF demonstration day in the United States at California’s Van Nuys Airport (VNY), which proved the fuels’ viability and safety.

The coalition joined with local civic leaders and other industry stakeholders in sponsoring the day-long event at VNY. The airfield’s four fixed-based operators fueled aircraft throughout the day with SAF, and the event included participation from local officials who expressed their support for this industrywide, all-voluntary, investment in research and innovation.

“Clean air for everyone is not only clean air for my constituents, but for anyone who lives in and around Van Nuys Airport,” noted Los Angeles City Councilwoman Nury Martinez. “The aviation leaders gathered here today…are leading in this particular area,” she added. “How you are responding to this challenge, and driving the challenge makes an incredible difference,” said Los Angeles World Airports CEO Deborah Flint.

The impressive demonstration of SAF’s appeal and viability at Van Nuys then paved the way toward the first European SAF demonstration day in May 2019, held at Tag Farnborough London Airport in the United Kingdom (EGLF), ahead of EBACE2019.

Aircraft from major manufacturers including Bombardier, Gulfstream, Cirrus, Embraer, Piaggio, Dassault and Textron Aviation, fueled up on SAF at EGLF, as well as other airports across Europe and the United States – including Caen-Carpiquet Airport in France; Sweden’s Stockholm Arlanda Airport; and Republic Airport in Farmingdale in the United States at Sheltair – for in-bound flights to EBACE2019, demonstrating the fuels’ viability.

This display of interest in alternative fuels bolstered the unequivocal message that SAF are safe and do not impact aircraft performance, while also offering airport and community benefits. The event, which was followed by a technical panel at EBACE2019, with contributions from experts across the industry that sought to further demystify, discuss SAF use and its availability, also reflected the ongoing commitment by business aviation to aircraft carbon reduction.

Efforts are now underway to significantly expand availability of these fuels as interest continues to grow throughout our industry and more business aviation operators seek to adopt sustainable fuels to support an extensive variety of missions. Similar demonstrations of the benefits, appeal and viability of SAF are planned later this year and into 2020, including at the industry’s largest business aviation event, the NBAA Business Aviation Convention & Exhibition (NBAA-BACE), next scheduled for 22-24 October 2019 in Las Vegas, United States.

IBAC recognizes the support that ICAO lends the industry when it comes to the front-and center issue of sustainability. For the business aviation community to achieve and expand its program for wider use of SAF, it calls for support from governments, and policy leaders, including those at ICAO, to incentivize the use of nonfossil fuel based products, and for States to increase their use of SAF. Looking toward the future, this approach will be key to lowering our industry’s dependency on fossil fuels, and reducing the CO2 output from the industry, and its effect on climate change.

A SUSTAINABLE FUTURE ON THE HORIZON

As previously mentioned, business aviation has always been an early adopter of technologies that have improved fuel efficiency and reduced environmental impact. Sustainable aviation fuels are a new technology available now for use by our innovative community, and their growing use will be a critical component of business aviation’s global commitment to mitigate and reduce carbon emissions.

That said, SAF is just one aspect of our industry’s ongoing sustainability effort. As we look ahead to the next five, 10 and even 20 years, we know that business aviation will continue to advance toward an increasingly smaller environmental footprint as new aircraft designs and advanced engine technologies bring even greater fuel savings and, with that, a commensurate reduction in carbon emissions.

What it all boils down to is this: Our industry’s commitment to SAF is not just about fuels, but about the future, and the business aviation license to operate. It is part of a broader focus on emissions, including the advancement of hybrid gas-electric and, ultimately, fully electric propulsion in urban air mobility and business aircraft applications. These emerging technologies offer the promise that travel within metropolitan areas around the globe – and even to the airport for longer-distance trips – will also be safe, efficient and environmentally-responsible.

Without question, business aviation is well-suited to confront the challenges of global carbon emissions reductions and innovation in sustainability. As the voice of business aviation before the International Civil Aviation Organization, IBAC looks forward to the continued support of ICAO, and advancing this continued story of improvement in the years ahead.

ABOUT AVFUEL CORPORATION
Avfuel provides fuel and services to the global aviation industry and is the leading independent supplier in the United  States. Established as a supply and logistics company 45 years ago, Avfuel is core competent in every aspect that  surrounds the delivery of fuel – from refinery to wingtip. Avfuel combines global access with personalized service throughout a fueling network of more than 3,000 locations worldwide and 650+ Avfuel-branded dealers. Our 100% dedication to aviation demonstrates our passion and commitment to a global community that prospers on the movement of goods and services around the world.